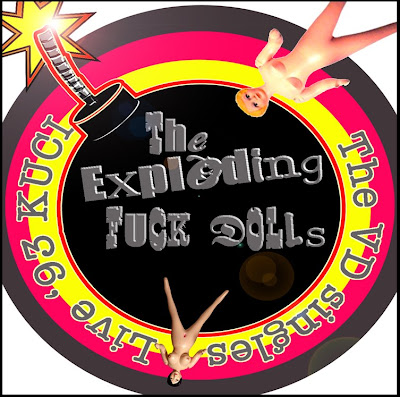 In 1993, the most successful line up of the Exploding Fuck Dolls was kicking everyone in the ass! Along with manager Steve Stone (RIP), we rose to the top of the O.C. punk scene and single handedly kick started the 77 punk revival.

Stone teamed up w Drac and Lohrman, to finance and release several Fuck Dolls singles. One of which only came out. It was the "American Bomb" 7"

The original release came with a poster and was on pink vinyl. There were about 200 made and some were signed. As we started our take over, a radio station KUCI from the University at Irvine, had us play live. There was an interview afterward. We found the live music part of this appearance... the interview is somewhere. Who knows where.

These are good quality recordings. It doesn't capture the full live feel of the band, the appearances were a world of their own. This does however show how tight we were. The other recordings - No Company Town, Little Girls, Left on the Right were also recorded, these were the Def Con sessions. We went to a studio in Mexico, just across the border, which was owned by a pharmacist. He recorded bands part time and sold pharmaceuticals the other part!!! These were never released. The band exploded before the release could happen.

The Fuck Dolls will be appearing at the venues listed on the poster below. Stay tuned for more updates.
Posted by The Last of the Bad Men at 2:11 PM No comments: 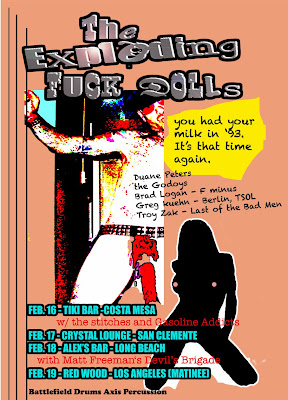 Posted by The Last of the Bad Men at 5:42 PM No comments: