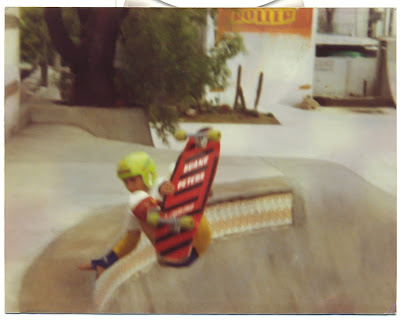 This pool was in Mexico City in around 1981. This was around the time when Cherry Hill Skatepark was still around. At the time, we were living in PA, so we used to go to Cherry Hill NJ to skate their park when ever we could get there.

Our dad lived in Mexico City in those years and we would travel to see him frequently. Cherry Hill was considered the best park in the world. It had 4 pools - 2 kidney pools, one keyhole and an egg bowl that was like 12" or 13" deep, a long half pipe which went into a 3/4 pipe, there were banks in the shape of an elbow and a slalom run... It was indoors and it was pretty perfect except for the keyhole.
There were 2 major parks in the city at the time - this one called "Dog Town skatepark" and another in a suburb called Satelite called "Skatorama". Though there were others scattered throughout the city, there 2 were the best.

In the back ground, you can see a gigantic 1/2 pipe with the word Roller painted on it. That thing had close to 5 feet of vertical and NO flat bottom. You can also see that in this pool, the tiles were the vert. The walls were almost to vert and then you hit the tiles.. .and then the HUGE coping!!!
That's Art (me) in the picture on a Duane Peters deck with Independent 169's and bones cubic wheels.
There were 2 brothers there who were locals - Enrique and Memo Ceniceros. Those guys ripped the place harder than anyone else. Real long board slides, elguerials, inverts... advanced for sure. There were a few others too who stood out, one guy named Cacha.. he was doing stuff nobody else could understand.
Will try and find more pics.
Posted by The Last of the Bad Men at 7:54 AM No comments: