Transworld Skateboarding Magazine/ Now and then... 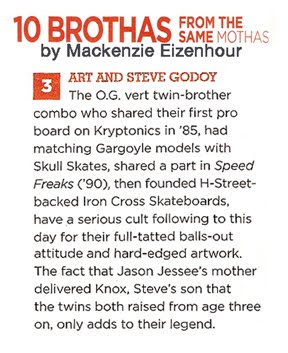 This appeared in the new Trans World Skateboarding Magazine. This is the June 2010 issue.
I was at the grocery store buying some sh*t and picked it up, started flipping through it and on page 60 there it was. It was so great to have a mention like this, especially to be on the same page as Steve and Micke Alba and the Pappas brothers, all of which are friends of ours.
Skateboarding really does have a colorful history. It's so mainstream now, more than it has ever been and people don't realize what it took for it to be so accepted! The obstacles, we all had to go through. Sometimes surviving on small paychecks, unlike now, where there are million dollar shoe and clothing endorsements!

Thanks to people like Danny Way who pioneered the Mega ramp, people like Tony Hawk who was so advanced in his early days, blowing away all the established pros of that era and continued to do so for decades... thanks also to Duane Peters who set a standard for attitude and resilience - bouncing back from serious injuries and DEATH!!... we never thought about why we did what we did, it just came naturally - tattooing, punk and skateboarding and now, most of top professionals are tattooed! That was no accident! People take if for granted but there is a reason for the evolution!

We were all kids who loved to skate and for us, it has kept us young. It has done so much for us as people... Unlike team sports, skateboarding promoted individuality, self esteem, physical fitness and creativity... you didn't have to worry about losing the game FOR THE WHOLE TEAM because you didn't catch the ball, and then have to face ridicule from the rest of the jocks!! You could progress at your own pace or you could strive to be like your skate heroes and learn the tricks they did. Your goal could be to get as crazy at the Upland Pipeline skatepark as Steve and Micke Alba did...

you could learn layback roll outs like Duane Peters !!! 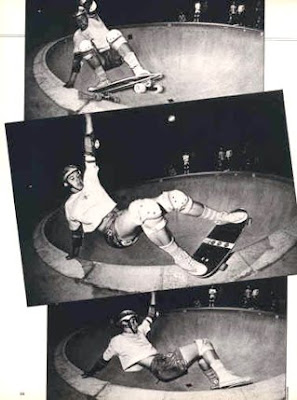 T-Bone Photo.
This was from our generation... we were kids looking up to them before we turned pro in 1985!!
Wanna say thanks to Mackenzie Eisenhour for the write up! Let's do an interview!!!
Posted by The Last of the Bad Men at 11:08 AM

Ah...where I grew up in suburban Cleveland, the only way to get the board you wanted was to mail-order it. I can still remember the feeling my brother and I would get as the UPS truck pulled up to the house, after waiting for a week or so. We'd watch quietly from the front window, wait to hear the door close and then see the driver jump back in his truck, and then we'd race to the door and grab the new deck!

Everything about sk8'ing in the 80s was an adventure. Now, I can go to a sporting goods store and pick out a deck. Where's the excitement in that?!

i know... there was so much innovation. things were so exciting. Now it's the standard popsicle shape which doesn't function!!!