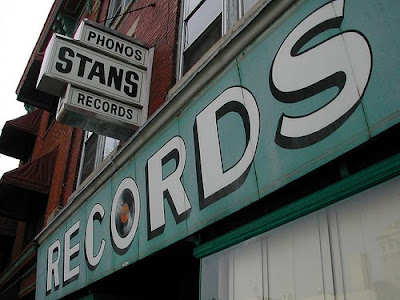 For us, liking punk was like someone who's 10 years older than we are liking the bands from their era... so it's understandable that the music happening now, is only "good" to the young of today. Our first exposure to the MC5 was the cover version of "Looking at you" by the Damned on the Machine Gun Etiquette LP. 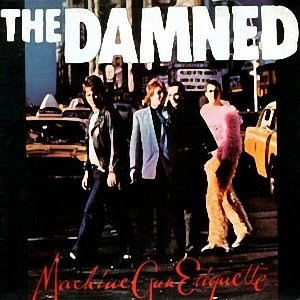 Though we had heard of them before that... that was the song which made us decide to listen to them. So... influences are roots... people who influenced the MC5 did not sound like them. I can' t think of ANY band before them who even came close! But then again, people get forgotten about. I tattooed a kid the other day, 20 years old who didn't know who the Clash was!! Imagine that.

We got into punk at 11 years old, the same year we got into skateboarding. We lived in Pennsylvania at the time and all the new music would come from England to New York and then down to us. Our favorite record store "Stan's Records" would get all the stuff... tons of singles  and LP's. You could go there anytime and get great sh*t. All the excitement a couple of 11 year old kids could want - Music and being active in a sport which, like "punk" music, put you outside the "Norm" which was disco, arena rock and team sports. This lifestyle reflected our personal attitudes and feelings toward the place we lived. 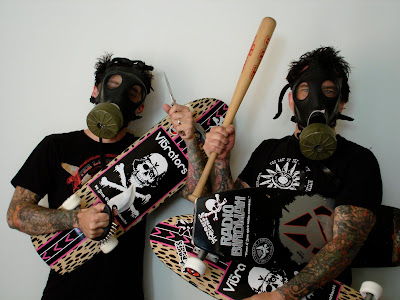 If we had this type of weaponry then... look out all you hicks...

Some years later, when punk started to evolve into Oi!, there came a band called the Cockney Rejects. When we got the "Power and the Glory" LP and saw the tattoos these guys had on them, that's when we went "Holy sh*t!!" spiky hair and safety pins in ripped clothes made a great statement but what better way to say "f*ck you!" to the world than tattoos!! 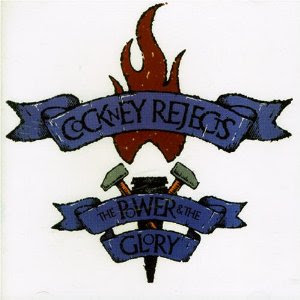 This is a feeling shared by the fans of so many revolutionary bands... like the MC5. So there is a parallel between all of this. Some of the Stooges and MC5 fans are older than we are but they can't tell me that they can't relate to this feeling. You must choose wether you are gonna be the problem or wether you are gonna be the solution. What the MC5 saw as the solution could have been seen by the mainstream as a major problem! Same as punk... same as tattooing.
This attitude affected us later as we became professional skateboarders. The time period was not ready to accept who we were and the image we projected. Tattooed, punk, skateboarders. If any of you remember the 80's, you CAN'T OVERLOOK the lame colors and styles, both musically and fashionably.

Imagine...your kid saying "Mom, dad, I have something to tell you...I wanna look like that!"
Sooooo bad. So fruity. Really, that era was marked with horrible music, horrible hair cuts and horrible clothing. How can anyone be involved in such a radical sport and wear that pink clothing, bleach your long bangs and listen to INXS!! It just doesn't mix!!!  How about that!!  In an industry controlled by NON skateboarding businessmen, who did market research to find that the boards were being bought for their 14 year old kids by their mommies... and realized that WE WERE TOO RADICAL for their taste, even though we didn't smoke, drink or do any drugs.

Ok.. see this ad? Look at these shorts...GAY! OK,  OK, we wore the sh*t ONCE!!! ONCE!!!  Were homeless in Dallas, and got a message through the skate shop next to this ramp, that we would be paid to actually WEAR these clothes AND these pads... we agreed. The ad appeared in Transworld Skateboarding Magazine. And guess what? WE NEVER GOT PAID!!! F*CK!
We were blacklisted for years! We did get a spread in Thrasher on tattoos... that was 1990, February I think. We had asked a certain photographer who worked for  one of the 3 magazines happening at the time why our "coverage" was so sporadic...if not rare, and he said "if you guys were to appear in a magazine 2 months in a row, it would be too much exposure." Not sure what that meant. Maybe we were real memorable. Nobody who was in the mainstream skate industry realized that we had our own network of "skate hoodlums" all over the world which lived the same way. Though they are older, (and still younger than we are) most of these guys are now tattooers and still skate! Guaranteed. We know this because we get correspondence from tons of skateboard fans from those days. 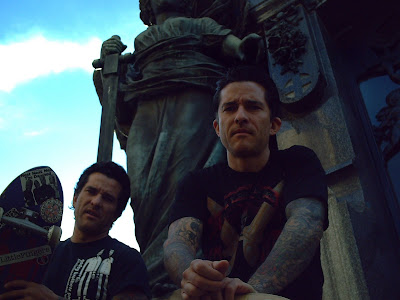 It's funny to look at the skateboard industry now. Most of the professionals in the magazines are tattooed. This cross over can be seen in the Bart Saric film "Skinned Alive". We started tattooing in 1985-86. Working on each other and on our friends. It was not what people think, that we skated professionally and then decided to tattoo. It wasn't like that. We were tattooing while we skated and when our skateboarding careers were over (at 23 years old) and the new generation came in, we had a career to fall back on - Tattooing.

For us, the connection between all of these lifestyles is what has kept us on the same path for all these years. We have devoted our whole lives to 3 things - Skateboarding, tattooing and punk rock. We have gotten notariety in ALL of these. Pro skateboarders, we hold 2 patents on tattoo machines - have exclusively tattooed the Guiness Book's most tattooed woman Julia Gnuse, and our bands have become relatively known in punk circles and have played with musicians from our favorite bands!!!

I just got word of your blog from Kimmer! I haven't heard about you guys since you routinely appeared in Thrasher Mag. Great stuff!

OMG they are so hot. Love the whacked out skateboards
and whoa the pix
with Tek and the bro's toward the bottom.
Yum Freakin O !!

Is that your real hair color and are your eyes really that color too???
hahhhahahahahahaha

The Last of the Bad Men said...

it's all true. what ever it is...
anways... a guy from the Johnny thunders forum!!! fucken great shit. Great songs, great writing...
j.t. was legendary.

Also , Dave Vanian is one cool dude . I met him back in Spring 1997 on my birthday , in Whittier ( Ca. , where I grew up ) .
He was in a store which specialises in bathing stuff , hanging out with Patricia Morrison .
My friend recognised them ; I was so high at the time that I thought he was f'ing around . But , sure as shit , it was Dave and Patricia !
Very nice folks , very friendly ."