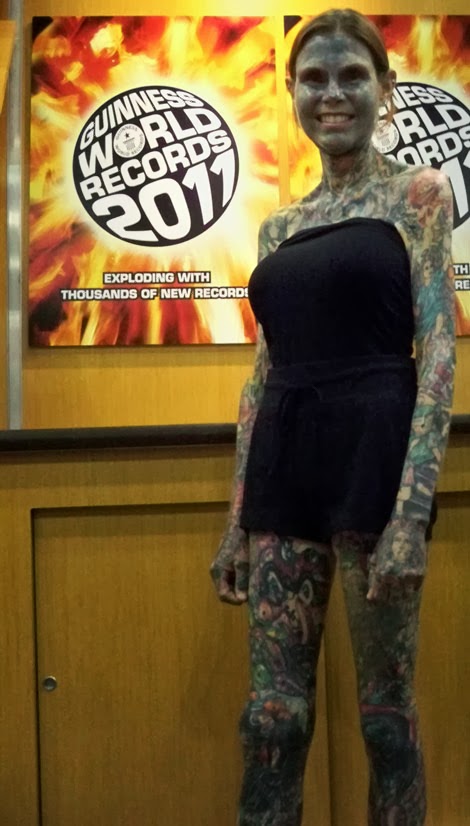 Many addicts eventually admit to having a monkey on their back. Julia Gnuse actually has two chimpanzees. They're embracing on her left shoulder, just above a vintage rendering of the Three Stooges along with an image of the famous chocolate factory scene from "I Love Lucy."

"I like to honor anything that makes me happy with a spot on my body," says the 55-year-old California woman who has at least 400 tattoos that collide into one another in an immense collage, covering 95 percent of this jigsaw puzzle of a body.

"There are parts I can't show you," she says, mentioning that the only areas not tattooed are below her ankles. Still, she doesn't leave much to the imagination.

"I have a great cast scene in my buttocks area of the TV show 'Bewitched.' I have Samantha flying on the broomstick in the cartoon sequence at the beginning, as well as each character, including my favorite, Gladys Kravitz."

Gnuse dropped her robe and flaunted her colorful body of work at the Jacob K. Javits Convention Center in New York, where Guinness World Records honored her as the World's Most Tattooed Woman -- a distinction she officially shares with Krystyne Kolorful, a Canadian exotic dancer.

"I saw a picture of Krystyne 25 years ago, when I was in Las Vegas," Gnuse says. "I didn't even have one tattoo back then. I didn't even dream at the time that we'd share this record."

In her mid 30s, this Missouri native developed porphyria, a skin disorder similar to lupus. Exposure to sunlight leaves her body scarred.

"It can look sometimes like I have third-degree burns," Gnuse says.

"So in 1991, I went to a tattoo artist named Art Godoy, and I got my octopus. That covered up one scar. Then I kept going."

Soon, she admits, she became an ink-aholic, visiting Godoy's parlor every week for more than 20 years, painting her body with a collage of images from TV shows, movies and pop culture -- all that meant something to her.

The Beatles, her favorite band, soon took a place on her right ankle. Considering that Ringo sang "Octopus's Garden," that must have kept her original tattoo happy. Naturally, all these critters needed to live happily in a yellow submarine, which Gnuse soon added.

Travel north on this living canvas and you'll find Noah's Ark and the Seven Dwarfs on her left thigh, Winnie the Pooh, Fred Flintstone and Popeye on her right.

Up a little more, and you'll find a Guinness World Records logo.

Gnuse holds Lisa and Marge Simpson close to her heart, just above her breasts. She once had a boyfriend tattooed in that region, too. But they had a falling out, and Godoy did some reinking and turned the ex-beau into Rodney Dangerfield.

"Rodney might be gone," Gnuse says, "but he still makes me laugh."

Only one other tattoo has been inked over, and that is a picture of Elvis, which was turned several years ago into Mickey Mouse. There has yet to be another Elvis sighting, at least on this woman's body.

Groucho Marx -- who famously sang the novelty hit "Lydia, the Tattooed Lady" -- is proudly featured on the breast of another woman, tattooed on Gnuse's shoulder.

Godoy and his twin brother are responsible for all of the work on this wearable masterpiece, which will be shown off extensively in the 2011 Guinness World Records book.

Gnuse estimates that she has spent more than $70,000 on her one-of-a-kind makeover. And after working as a courier and a cookie seller, among other jobs, she's now developing a business making personal appearances.

She's not always able to be such an extrovert. While she's quick to parade in a bikini for reporters at a photo op, her condition prevents her from flashing a lot of flesh on a sunny day, and that keeps her covered up much of the time.

"The tattoos have helped me appreciate my body," she says. "When I was younger, I was a pimple picker. It was just pick-pick-pick, and I thought, 'Well, if I put a beautiful art scene on my face ... that would help me not to pick at my blisters and scar myself even more."

In Groucho's song, Lydia leaves the circus after sweeping an admiral off his feet. "The ships on her hips made his heart skip a beat," as the lyric goes.

In real life, Gnuse has a longstanding romance with a musician, while sharing her home with her beloved cats.

"My guy doesn't have tattoos," she says, "but he appreciates mine."

When Art moved to Canada his twin Steve finished the art on Julia.

Read More: Ink Up! Meet the World's Most Tattooed Woman MSNBC.COM
Posted by Retro Kimmer at 7:04 AM