Deniz and engineer Mike Gittens at "the Hive", Vancouver working on "Ride"
HOW DO WE DO IT??????
STEVE- FACT-we all live far apart...Danny and me (Steve) are room mates in California, Art lives near Troy in western Canada and Deniz drifts from middle America to Australia...so as far as the "normal" function of this band...heres how it goes:
RECORDING- well, we exchange demos...Art, Deniz and Troy write the music...Danny
writes the words I just play the drums...we do individual practices & its rare that we ever get to practice together as a band...only a day or two before shows or before recording do we practice together....so we really NEVER get to hear what any of the other members are playing until they lay down their tracks in the recording studio...which is SO RAD cuz then we really see what this band is made of.
When we recorded 'Ride', (which was a total surprise by the way, due to the fact that many songs were modified from the original formats that we each practiced with on the demos!!!...changing tempo, arrangements & backing vocals-all last minute, with only one practice together before diving right in to record!!!)...we were all impressed with not just the outcome but it proved to us that this band is not an amateur band...it proved that our formula and our chemistry is definately something that hardly any "normal" bands could ever manage to achieve even practicing 2-3 times a week!!!
FACT- we all work for a living...we arent funded by any labels...nobody pays for our recording time...so we gotta be quick, precise and focused...listen to 'Ride' and see for yourselves. The first CD 'Nowhere is Safe' was the same way...this long distance arrangement is truly a way to separate the amateurs from the experienced...from the Golden Breed recordings to tours with Deniz to the Bad Men's CDs and touring...it all has been done this way...and of course it brings out the best in all of us and even more excitement to live shows cuz its not all rehearsed and predictable.
ART- Steve normally gets all the drums down in one or 2 takes... Danny does lots of tracks and filters through em when we mix, he's very particular on what he sings and how he sings it.. as for Troy, he's as solid a bass player as they come, when we were recording the "Ride"record, he was in and out doing his parts. Deniz is always great... he doesn't always have to be rehearsed, and most of the time
the stuff is off the top of his head. People picture Deniz as precise.. but in reality, when playing with him, it's about "loose tightness", the improvisation is what makes things special... Personally, I love going in the studio with this band because it's always a surprise. The ingredients everyone brings to the table individually, really blends into amazing results. BELOW: Troy and Steve, the Last of the Bad Men live in Harrisburg PA. 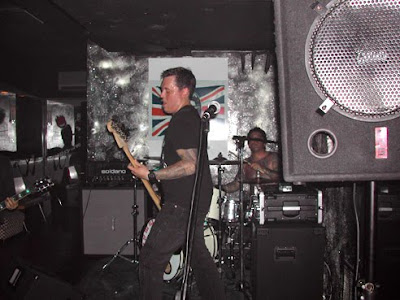 You just have to see these guys in person they'll blow your mind right out of your body.....