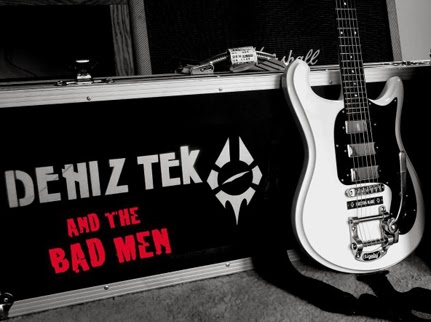 I was f**king around at the tattoo shop, between appointments and came up with this guitar idea. I don't understand why nobody has made a Deniz Tek guitar yet. I mean, how does he get into the top 100 guitar players (according to Rolling Stone), get into the Rock n Roll hall of fame, be part of a LEGENDARY band, who in my opinion, are to Australia, what the the Sex Pistols are to England, and as far as their contribution and influence on TONS of bands... 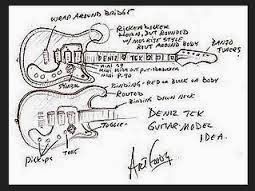 He has collaborated with members of the MC5, Sonic's Rendezvous Band and many others.. has kept working musically ever since Radio Birdman... Look at this guitar, it's ureal!!! Imagine the tone...all the pickups ON all the time, and controlling the tone by blending the volume knobs. The toggle switch, has it's own job to do... it's a secret. I'm working on it...Who's gonna step up and make it?

I think white or black...with dayglo binding and pick guard..